Future of Ghanaian M&A deals promising, according to bankers

The Benso Oil Palm Plantation and FanMilk International deals (both involving foreign investment in the country) over the past year are merely an indication of an upward mergers & acquisitions trend, according to a GhanaWeb report.

Usually, with increased merger activity comes heightened competition scrutiny, of course — not so in Ghana, however, as the West-African country still lacks an antitrust and merger-review law.  AAT noted in December:

[Ret. Ghanaian Supreme Court] Justice Date-Bah, who has held visiting academic positions at Oxford and Yale Law School, deplored the legislature’s previously failed attempts of enacting a comprehensive competition law, calling for the country to do so to ensure proper market dynamics.

The most recent economic report quotes Randolph Rodrigues, sr. investment banker at Stanbic Bank Ghana, as predicting “a rise in M&A activity in the country given the increasing emphasis on local content across sectors in the country.”

“The renewed quest for the institution of local content requirements across industries is expected to drive a wave of M&A activity, with larger foreign-owned enterprises seeking partnership opportunities with indigenous operations to continue to grow within the legal framework of their respective industries. Banks are well placed to lead the way in advisory services.”

In AAT’s view, four factors may contribute to the anticipated deal volume and influx of foreign investment, of which one is competition-law based: (1) the absence of antitrust hurdles, as noted above, (2) the relatively open Ghanaian economy, (3) stable political climate (unlike its distant neighbor at the moment, Nigeria), and (4) high intrinsic growth rate of Ghana’s GDP: 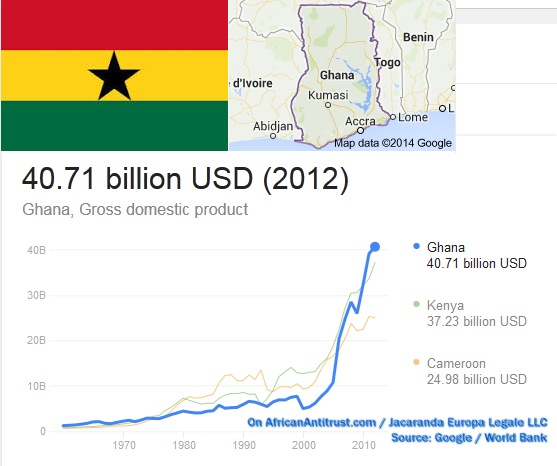