At the Concurrences “Antitrust & Developing and Emerging Economies” conference held at NYU Law last Friday — and aptly sub-titled “Coping with nationalism, building inclusive growth” — the audience was treated to a (rather iconoclastic, yet fascinating) keynote speech by Nobel laureate economics professor Joe Stiglitz, which highlighted what would become a theme woven throughout the four panels of the day: One size does not fit all when it comes to competition-law regimes, according to a majority of the speakers; imposing a pure U.S. or EU-derived methodology without regard to local economic and/or political differences is doomed to fail.  However, as we outline further below, there were also countervailing voices…

In the words of Professor Stiglitz, his advice to developing nations was (perhaps to the chagrin of U.S. government representatives, such as the FTC’s international director, Randy Tritell): “don’t copy the US antitrust laws and presumptions!”  Smaller markets in developing countries are even more susceptible to market power by few large firms.  Competition law can be used in developing countries to advance the public interest, as there are fewer “tools in the toolkit” in those nations, and in his view, all available tools should thus be used.  He referred to the WalMart/Massmart transaction in South Africa in this regard, noting the public-interest conditions imposed there.

On the day’s Mega Mergers panel, SACC Commissioner Tembinkosi Bonakele noted how the outcomes of truly global “mega mergers” all having been positive, “there has been no outright prohibition, there really is no problem that’s too big which could not be remedied by the authorities and the parties.”

Observes Andreas Stargard: “Commissioner Bonakele also pointed to the importance of international merger enforcers cooperating on remedies, in order to allow these positive outcomes to be maintained.  Taking up Professor Harry First’s hypothetical of a joint or ‘merged’ antitrust enforcement agency, Mr. Bonakele considered a combined merger authority for the African continent a possibility, especially in light of the many small jurisdictions which individually lack resources to police cross-border M&A activity.”  Mr. Bonakele expressed the concern that “the smaller, national enforcers certainly feel as if they cannot block a mega deal on their own, so they largely defer” to the established agencies, such as the EC and DOJ / FTC.

In response to Frederic Jenny’s critical introduction of the South African Competition Amendment Act, Commissioner Bonakele commented that the current legal regime lacked the ability to tackle concentration as a market feature in itself, whilst the SACC had a comparatively positive track record on unilateral enforcement issues.  Overall, he disagreed with the moderator that most of the Bill’s changes were drastic, stating simply that it would in fact bring South Africa more in line with other international regimes.

As to the ministerial intervention powers, he identified two concerns, namely the use of the agency’s resources as well as the possible risk of abuse by a minister who could employ the new law to pursue ulterior motives against a firm or a sector.

Prof. Ioannis Lianos characterized the “slightly fuzzy public interest test” as largely a scheme to enhance the bargaining power of the competition agencies that do apply such a test. 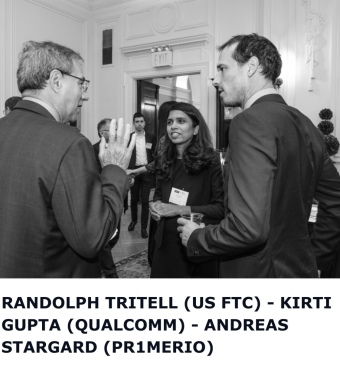 Canadian attorney and former enforcer Lawson Hunter pointed out that the trend of growing political interference in the merger approval process has spread globally, not only in developing nations but also in well-established regimes — often under the guise of national security reviews, which are “obscure, opaque in process, fundamentally political, and without any ‘there there’.”  Merger review has “simply become very broad and less doctrinal.”  “I found it interesting that Mr. Hunter recommended that other antitrust agencies should give more frank input into their sister agencies, if and when those stray from the right path,” said Stargard, who focuses his practice on competition matters across the continent.  “Hunter also pointed to the tendency in emerging antitrust jurisdictions to abuse the remedy process in merger control to address economic issues that lie well outside the actual competition concerns that may have been found — an issue we have also come across, sadly.”

Commissioner Bonakele closed the final panel of the day by addressing the recently ratified South African Competition Amendment Bill: he admitted that there were some “radical” provisions in the law, such as the power to break up companies, as well as the existence of a risk of government using the law’s new national security provision in a protectionist manner. He concluded by stating his personal worry that the law had possibly too much ambition, which could be difficult to implement in reality by the SACC.