FCCPA in effect – but not quite, as FCCPC not yet fully operational

As AAT reported previously, the landmark Federal Competition & Consumer Protection Act (FCCPA) that suddenly went into effect in Nigeria earlier this year has not quite been operationalised.  Notably, the agency that is supposed to be tasked with enforcing the FCCPA, the Federal Competition & Consumer Protection Commission (FCCPC) is currently “undergoing construction”, so-to-speak.  An African competition-law practitioner with Primerio notes that “apparently there has been some political wrangling around the constituents of the FCCPC’s Board,” which is unsurprising, to say the least.  One might be inclined to say, Plus ça change, plus c’est la même chose…, as politics has always played a major role in Nigerian enforcement.

That said, the AAT editor does understand that, at a minimum, the Director General of the existing Consumer Protection Council, Babatunde Irukera, will serve in some capacity with the FCCPC — it is unknown whether the remaining 5 CPC commissioners will likewise continue to act for the FCCPC or not.  (Screenshots of his Twitter account below, indicating a full-blown transition from the CPC to the FCCPC). 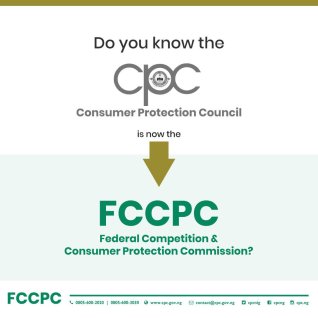 One indication of the lack of the FCCPC’s operational status when it comes to mergers is that its web site (presumably soon to be http://fccpc.gov.ng/) still yields an error message.  Another is a recent joint statement issued by the SEC and its yet-to-be-established counterpart, which provides in relevant part as follows:

In order to ensure continuing and seamless commercial transactions and market operations, SEC and FCCPC have come to a mutual understanding with respect to these transactions within the transition period, which pursuant to this notice commences immediately, and shall remain in force until otherwise discontinued by further Advisory or Guidance.

During this transition period, starting today, May 3rd, 2019:

Notifications previously received by SEC, but yet to be decided, will be subject to the interim process above and FCCPC will convey the decisions accordingly.

We will update AAT’s readership with new intel as soon as it becomes available.  For the time being, the status quo remains largely intact.  Says Andreas Stargard, an antitrust practitioner:

“For now, merger parties should proceed as before, namely: analyse your transaction under the Investment & Securities Act (ISA), and file with either the SEC or the FCCPC — some advise to file with the SEC for the time being, if applicable, as the lack of full operational status of the FCCPC does not bode well for procedural thoroughness or guaranteed document retention in this early phase.  That said, if your transaction has a longer time horizon, with closing potentially several months down the road, your counsel should take into account the very real possibility of there being a notification under the FCCPA, even if none was required under the ISA.  I expect the FCCPC to set merger notification thresholds very soon.”

Osayomwanbor Bob Enofe, an academic and proponent of the Nigerian competition law notes, however, that the current interim arrangement “only suggests to me that the SEC currently leads, concerning merger enforcement in Nigeria, rather than clarifying that the FCCPC is not existent (especially given the transitional period established by the two Commissions).”  He continues: “The erstwhile CPC might be revamped to reflect a more competition-law cognisant staff base,” noting that “various competition law offences now exist in Nigeria,” of which cartel conduct is punishable not only my monetary fines but also criminally under the FCCPA.