The COMESA Competition Commission has announced that it is accepting applications for the position of Director of the CCC until the end of October.  Says Andreas Stargard, an antitrust practitioner with Primerio Ltd.:

“The post is currently held by Dr. George Lipimile, the agency’s first and, therefore by definition, most influential chief.  Dr. Lipimile has certainly steered the comparatively young Commission into the right direction during its formative years, notably overseeing a complete makeover of the merger-notification procedure early on in the process, after much criticism of the initial system.

We are curious to see who will replace him in March 2021, as Dr. Lipimile’s term expires at the end of February.  Will it be a true competition-law expert, or will it be a politically-motivated appointment made by the COMESA Secretariat, pushing for someone who is more of a trade lawyer or, worse, economic protectionist.  What the CCC needs now to continue gaining international recognition and respect (from its peer agencies, as well as from commercial parties!) is a qualified antitrust attorney who understands the law & economics aspect of competition practice, and who will apply these principles neutrally throughout the COMESA region!”

Back in 2015, we quoted Mr. Stargard as follows, suggesting a path forward for the agency:

“If the CCC steps up its enforcement game in the non-transactional arena, it could become a true force to reckon with in the West.  I can envision a scenario where the CCC becomes capable of launching its own cartel matters and oversees a full-on leniency regime, not having to rely on the ‘follow-on enforcement’ experience from other agencies abroad.  The CCC has great potential, but it must ensure that it fulfills it by showing principled deliberation and full transparency in all of its actions — otherwise it risks continued doubt from outsiders.”

It remains to be seen who the Director’s replacement will be and which of these topics will dominate her or his agenda, if any.  The Director’s term is for 5 years, offering a salary of between $70,000 and $83,000.  Details on the opening can be found here.  Only Member State nationals can apply.  Interestingly, COMESA member states’ antitrust enforcers likewise posted the announcement on their individual web sites: 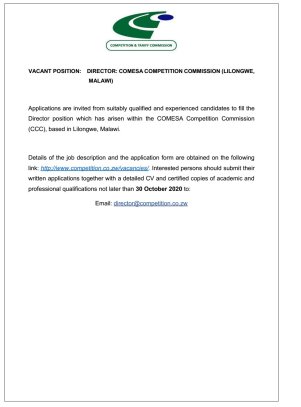