Making sense of the COMESA Competition Commission’s merger notification site is no  easy undertaking.  The perplexing nature of its case-numbering system mirrors perhaps only the level of confusion surrounding the CCC’s original merger threshold and notification-fee guidelines (e.g., see here on that topic).

As we pointed out here, the merger statistics (as they had been released as of January 2016) for 2015 were disappointingly low.  In today’s post, please note that we are upgrading those numbers, however, to reflect additional material now made available on the official CCC web resource, reflecting 3 additional filings, bringing the year-end total for FY2015 to 18.  Three of those were “Phase 2” cases.  In addition, according to the CCC, there were 3 supplemental cases in which “Comfort Letters” were issued to the parties.

For year-to-date 2016 statistics, the numbers look analogous, albeit somewhat higher than the 2015 slump — that is to say, still diminished from the 2013-2014 height of COMESA ‘mergermania’, during which (mostly international) counsel took the confusion surrounding the CCC notification thresholds to heart and erred on the side of caution (and more fees), advising clients to notify rather than not to (65 in the 2 years), or to seek Comfort Letters, which also were issued in record numbers (19 total for the 2-year period)…   With that said, the agency is now up to 16 merger cases, with 2 Second-Phase matters on deck.

Going from 44 notifications in 2014 to 15 filings last year, the Competition Commission of the COMESA common-market area has seen a dramatic decline in merger filings.

“These statistics are akin to the agency’s inaugural year — a slump that can only be explained by one of two likely underlying rationales:

(1) Potential filers have begun to follow widespread advice from legal counsel that effectively admonishes would-be notifying parties not to do so until COMESA establishes a more robust enforcement and notification regime; or (2) — and this is the CCC’s preferred official explanation — the increased filing thresholds as of March 2015 caused fewer transactions to be caught in the mandatory filing net of the regulator.”

Of further concern, Stargard notes, is that the supporting merger documents made available by the CCC do not reflect the purported official statistics.  This fact is reflected in the MergerMania article published on AAT last August..  “For each and every one of the 15 filings identified by the Commission in its official statement, we should be able to see the underlying SOM [statement of merger] and the concomitant Decision — ideally published contemporaneously with the occurrence of each relevant event,” he says.  “Unfortunately, on the CCC merger site, two merger filings are missing entirely (numbers 9 and 10), and the others are commonly published many months after the public-comment deadline for the transactions has long expired.”

To date, a parsing of the (available) 2015 statistics shows that 3 of 15 cases actually went into Phase Two review, Stargard observes.  “This would generally imply a more serious concern raised by the authority in terms of the effect on competition post-merger.  Here, however, it is quite unclear what the potential threat to competition in, for example, a purely private-equity deal would be.  The official decision (no. 15, from November 2015) fails to even hint at a possible threat — as one would commonly expect from a PE to PE transaction, which usually raises little to no antitrust eyebrows…”

Our updated AAT COMESA MergerMania statistics are therefore as follows (again noting the fact that AAT bases its count on only the official, published and available merger documents, instead of relying on mere press release-based summaries published by the CCC).  We also note that to date, 2016 has seen one “merger inquiry notice,” namely of the Dutch Yara / Zambian Greenbelt fertiliser deal.  The public-comment period for that transaction expires on January 22, 2016.

The full text of the COMESA release follows below: 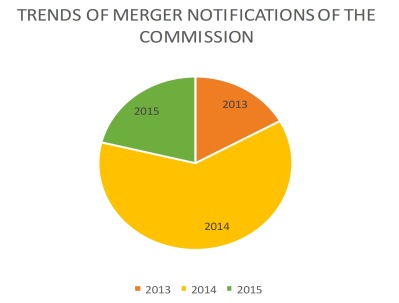 As shown in the pie chart the Commission dealt with more mergers in 2014 as compared to 2013 but this trend has gone down in 2015. This trend may be attributed to the supposition that in 2013, the Commission had just commenced operations and therefore some stakeholders were not immediately aware of its existence and operations. By 2014, most stake-holders had become aware of the Commission and its operations, hence the significant increase in the number of mergers notified. The significant reduction in 2015 can be attributed to the supposition that the merger notification thresholds approved by the Council of Ministers on 26 March 2015 which has resulted in smaller mergers escaping the notification. Before 26 March 2015, the merger notification thresholds were Zero hence all mergers were notifiable regardless of size.