This morning, economic-development minister Ebrahim Patel announced the retention of the 38 year-old Mr. Bonakele as the top antitrust enforcer in the South African republic, making permanent for a five-year term the interim appointment of the man who said the following in an interview regarding the independence of the competition authorities in South Africa:

“While competition authorities should not be beholden to the government neither can they be loose cannons who claim independence without accountability.”

In prolonging Mr. Bonakele’s interim appointment for another five years, Minister Patel thus assured that the important position of Competition Commissioner did not go to a “loose cannon”…

The appointment is made pursuant to Part A, Art. 22 of the South African Competition Act of 1999, as amended, which also provides (in sub section 4) for the flexible salary and benefits determination to be made by the minister himself: “The Minister must, in consultation with the Minister of Finance, determine the Commissioner’s remuneration, allowances, benefits, and other terms and conditions of employment”

Public announcement and emphasis on enforcement

In the duo’s official tweets announcing the decision (see graphic extract below), Patel congratulated Mr. Bonakele, reaffirming his and the SA cabinet’s support of the “eminently suitable” candidate, and emphasizing the importance of (1) the Competition Commission‘s ongoing and hotly debated private health-care inquiry as well as (2) the “social-justice” elements of merger conditions imposed by the SACC on mergers in the past 5 years, purportedly “protecting” 4,900 jobs.

The agency had come under considerable flak in the past year due to its high staff and executive-level turnover and a work environment that has been described as “toxic” by insiders.

The official release by the Ministry of Economic Development quotes Patel as follows:

“I am pleased to have someone of Bonakele’s calibre at the helm of the Competition Commission. He is taking leadership of the Commission at a time when the South African economy needs to become more competitive and create many more decent work opportunities by combatting market abuse such as cartels and pervasive monopolies and ensure competitive pricing of products. In particular, the key jobs drivers identified in our policy frameworks require coordinated and concerted efforts improve economic performance and development outcomes.
“The Competition Commission has been one of a number of successful economic agencies and regulators that are together beginning to transform the South African economy. Mr Bonakele possesses the skills and experience to build on the successes of the Competition Commission.”

The agency’s official “Structure” page had not yet been updated as of the day of the announcement, listing Mr. Bonakele as “Acting” head and still showing the long-departed Ms. Makhaya as a Commission official. 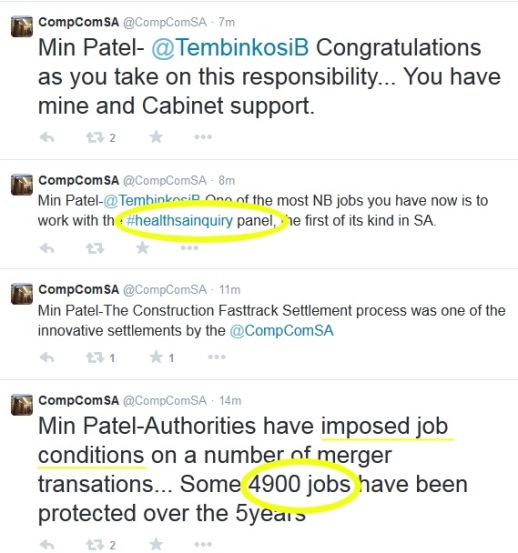