On 9-10 September 2019, the Comesa Competition Commission (CCC) hosted its 6th  “Regional Sensitization Workshop for Business Reporters on Competition Law and Trade Developments within the Common Market” workshop in Nairobi, Kenya as part of its advocacy initiative to promote competition law and enforcement activities across the COMESA region.

AfricanAntitrust, having attended last year’s event, was again invited to attend the event and senior contributor and competition lawyer, Michael-James Currie, attended the event on behalf of AAT and participated in a serious of panel discussions and informal interactive sessions with members of the CCC and Competition Authority of Kenya. 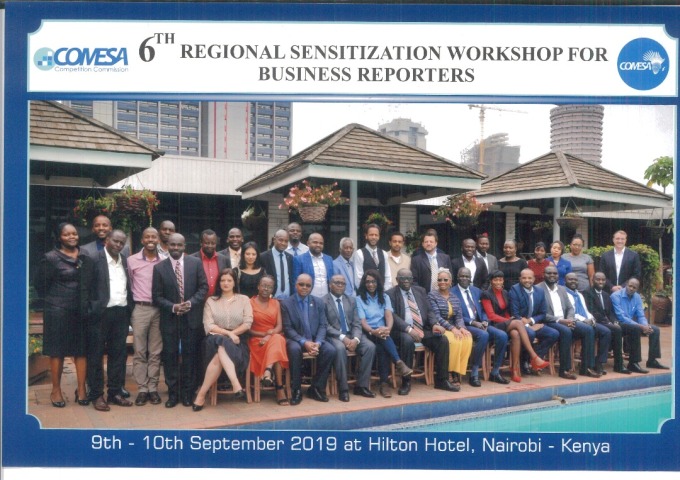 The workshop was well attended with a year on year increase in attendees reflecting the importance and popularity of this initiative. The CCC should be congratulated on a well organized and structured workshop.

Patrick Okilangole, Board Chairperson of the CCC, opened the event by highlighting the importance of competitive domestic markets to  “realize the benefits of trade; multilateral and bilateral trade agreements recognize the need to guarantee that restrictive business practices do not hinder the positive effects of free trade”.

“(i)     Ineffective competition policy frameworks. Over the past few years, competition law has been enacted in several Member States of the Common Market. However, in some countries, competition frameworks have included:

(ii)      unjustified and discretionary exemptions, for example, utilities managed by the state in key economic sectors,

(iii)     lack of sufficient investigative powers and tools in the current national and regional legislation to deter anticompetitive behaviour,

(iv)    lack of independency in decision making since competition agencies report to and their decisions may be vetoed by a ministry, and

Okilangole reaffirmed the true hallmark of an effective competition law regime, namely that competition law should be focused on protecting the competitive process and not a particular competitor. “The rules are not meant to punish large companies on account of their size or commercial success. The key feature of the competition rules is to create a level playing field for all business players in the market.”

Okilangole’s remarks were echoed by the Chief Executive Officer of the CCC, George Lipimile who emphasised the need to move away from protectionist policies in order to realise the benefits that flow from increased regional trade.

Restrictive business practices, particularly abuse of dominance practices and collusion were identified by Lipimile as being particularly prevalent within COMESA and that increased enforcement activities are required, both by the CCC and regional agencies, to detect and prosecute anti-competitive behaviour.

The workshop was also used as an opportunity to present and engage on the CCC’s Guidelines on Restrictive Business Practices (which were approved in April 2019). The objective of the Guidelines is to provide greater clarity, predictability and transparency in relation to the analytical framework which will be used to evaluate alleged anti-competitive conduct. The Guidelines also provide greater guidance on the process and circumstances in which the CCC may grant exemptions.

The CCC was well represented (so to was the CAK) and senior investigators, analysts and members from the executive team provided useful insights into the enforcement activities of the CCC as well as what lay ahead in the pipeline. Attendees were invited to engage, debate and where appropriate raise concerns regarding the efficacy of competition law enforcement in COMESA. It is this willingness to be open and engage proactively with constructive criticism which is perhaps the hallmark of this CCC initiative and certainly welcomed by the attendees.

As to enforcement updates, the CCC put together comprehensive presentations both in relation to merger control and restrictive business practices more generally. We highlight some of the more noteworthy developments below.

Willard Mwemba, manager of mergers and acquisitions at the CCC, confirmed that over 230 transactions have been notified to the CCC between 2013 and July 2019. Of these, 17 were approved subject to conditions.

From a merger trend perspective, the CCC witnessed an increased shift in merger notifications in traditional sectors, such as agriculture and construction, to emerging sectors such as energy, banking and financial services with the most active member states including Kenya, Zambia, Mauritius, Zimbabwe and Uganda.

The combined total turnover value of all mergers assessed by the CCC to date amounts to over USD 110 billion. Although 2019 figures were not presented, the CCC highlighted that total Foreign Direct Investment in COMESA grew in 2016 from USD 18.6 billion to USD 19.3 billion in 2017 representing nearly half of Africa’s total FDI inflows. Again, highlighting the significance of the COMESA market in the global space.

Although the CCC has had an active merger control regime in place for many years, a number of commentators have raised the lack of robustly investigated and prosecuted abuse of dominance or cartel cases as a key hindrance to effective competition law enforcement in COMESA. While the CCC acknowledges that more should be done in this regard, below is a list of non-merger matters which the CCC has concluded in past three years:

Determination of Anti-Competitive Conduct: Procedure of Commission on its own volition

The CCC also confirmed that they are currently conducting a number of market screening initiatives across priority sectors. Following the conclusion of these screening exercises, the CCC will decide whether to prosecute any firms engaged in restrictive business practices.

As part of the CCC’s efforts in detecting and investigating anti-competitive behavior, the CCC has increased its collaborative efforts with domestic member agencies and has established the “Restrictive Business Practices Network” to increase the efficacy of cross-border cases.

In light of the tripartite negotiations between SADC-EAC-COMESA as well as the negotiation of competition policy in terms of the African Continental Free Trade Agreement, it is imperative that the CCC develops an effective competition enforcement regime which assists and incentivizes free trade across the relevant markets. To do so, the CCC must be equipped with the necessary resources to ensure that it has the capacity to effectively execute its policies.

Despite the significant challenges faced by the CCC, it is encouraging to note that the CCC is taking a more robust approach to detecting and prosecuting anti-competitive practices in the COMESA market and are endeavoring to do so in accordance with international best practices.

If the CCC is able to deliver on the objectives and action items which were discussed in detail at the workshop, then there is every reasons to look forward to a more active CCC in the months to come with interesting cases likely to be brought to the fore.