The first-ever COMESA-sponsored competition law workshop focussed solely on the business community, currently underway in Nairobi, Kenya, stretches the capacity of the Hilton conference room where it is being held.

The event’s tag line is “Benefits to Business.” Especially now, with the African continent sporting over 400 companies with over $500m in annual revenues, the topic of antitrust regulation in Africa is more pertinent than ever, according to the COMESA Competition Commission (CCC).

The head of the Zambian competition regulator (CCPC), Dr. Chilufya Sampa, introduced the first panel and guest of honour. He identified the threats of anticompetitive last behaviour as grounds for he need to understand and support the work of he CCC and its sister agencies in the member states.

With COMESA trade liberalisation, the markets at issue are much larger than kenya or other national markets. The effects of anticompetitive conduct are thus often magnified accordingly.

The Keynote speaker, Mr. Mohammed Nyaoga Muigai, highlighted the exciting future of the more and more integrated African markets, offering new challenges and opportunities. He challenged the audience to imagine a single market of over 750 million consumers. Companies will have to think creatively and “outside the box” in these enlarged common markets.

His perspective is twofold: for one, as a businessman and lawyer, but also as a regulator and board chairman and member of the Kenyan Central Bank. Effective competition policy (and access to the legal system) allows to prepare the ground for the successful carrying out of business in the common market. Yet, businesses must know what the regulatory regime actually is. Therefore, the duty of lawyers is to educate their clients about the strictures and requirements of all applicable competition law, across all COMESA member states.

After a group photo, the event continued with an informative presentation by Mr. Willard Mwemba on key facts that “companies should know” on merger control in the (soon enlarged to 21 member states, with the imminent addition of Tunisia and Somalia) COMESA region, starting with its historical roots in COMESA Treaty Article 55 and continuing through the current era since 2013 of the CCC’s regulatory oversight.

Willard Mwemba, Head of M&A at the CCC

He provided relevant merger statistics, jointly with Director of Trade affairs, Dr. Francis Mangeni, which were of great interest to the audience, followed by a discussion of substantive merger review analysis as it is undertaken by the Commission. The benefits of the “one-stop-shop” characteristic of CCC notification versus multiple individual filings were extolled and individual past M&A cases discussed.

AAT will live-update the blog as the event progresses.

Dr. Sampa, as head of the Zambian CCPC and a former CCC Board member, emphasized the importance for companies to have functioning and well-implemented antitrust compliance programmes in place.

A spirited discussion was had relating to the 30% market share threshold the Commission utilises to evaluate triggers for launching antitrust conduct investigations. Primerio’s Andreas Stargard argued for COMESA’s consideration of an increase in this trigger threshold to 40%, proposing that:

“Especially in an already concentrated market (where players possess majority shares anyway), a low initial share threshold is of little to no additional enforcement value. On the contrary, a low threshold may hamper vigorous competition by smaller to midsize competitors or newer entrants, who wish to grow their (previously innocuous) smaller share of the market but are simultaneously held back in their growth efforts by trying not to cross the 30% barrier so as not to attract the attention of the Commission.”

There was also an issue raised regarding private equity and non-profit / “impact investors” and the like having to bear the burden of notifications and ancillary fees in cases that are otherwise unobjectionable almost by definition (since the investors are not present on the market of the acquired entities in which they invest). Dr. Mangeni indicated that the CCC will investigate and consider whether a proposed change in the applicable Rules to account for this problem may be advisable in the future.

The CCC’s chief legal advisor, Ms. Mary Gurure, presented on conflict of laws issues within the COMESA regime, harmonisation of laws, and CCC engagements with individual member states on these issues.

Crucially, she also mentioned a novel initiative to replicate a COMESA-focused competition enforcer network, akin to the ECN and ICN groupings of international antitrust agencies. 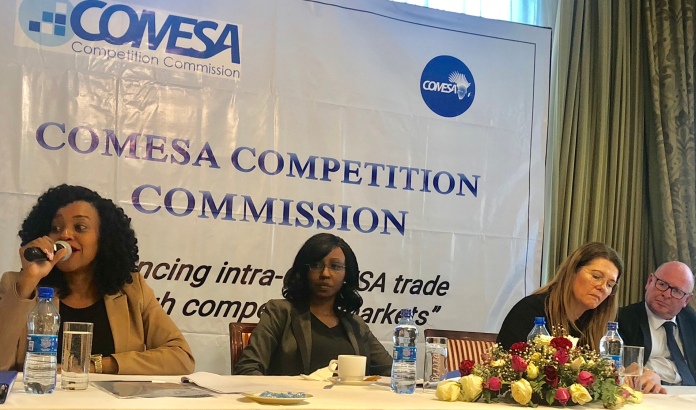 The conference concluded with a business lawyer panel, in which outside counsel and in-house business representatives voiced their perspectives, largely focusing on the issue of merger notifications. These topics included the (1) burdens of having to submit certified copies of documents, (2) high filing fees (particularly in light of relatively low-value deals being made in the region), (3) comparatively low notification thresholds (e.g., the $10m 2-party turnover limit), (4) remaining, if minimal, confusion over multiple filing obligations, (5) questions surrounding the true nature of the “public interest” criterion in the CCC’s merger evaluation, which could benefit from further clarification via a Guideline or the like, and (6) the importance of predictability and consistency in rulings.

Panellists also commented on the positive, countervailing benefits of the one-stop-shop nature of the CCC, as well as highlighting the friendly nature of the COMESA staff, which permits consensus-building and diplomatic resolutions of potential conflicts.

Mr. Mwemba concluded the event by responding to each of the panel members’ points, noting that forum-shopping based on the costs of filing fees reflected a misguided approach, that the CCC may consider increasing filing thresholds, and that the CCC’s average time to reach merger decisions has been 72 (calendar) days.